YOU’RE INVITED! 🙂  Please see below or the attached flyer for your invitation to our next History Lecture.

The Monclova Historical Foundation invites you to join us on Wednesday, July 12th at 7:00pm for our next History Lecture – General “Mad” Anthony Wayne featuring Frank Butwin.

Anthony Wayne was a U.S. Army officer, statesman, and member of the United States House of Representatives. Wayne adopted a military career at the outset of the American Revolutionary War, where his military exploits and fiery personality quickly earned him promotion to brigadier general and the nickname “Mad Anthony”. He later served as General in Chief of the Army and commanded the Legion of the United States in the famous Battle of Fallen Timbers.

The lecture will be presented by Frank Butwin, who serves on the boards of the Maumee Valley Heritage Corridor, the Waterville Historical Society, the Perrysburg Area Historical Museum, and the Fallen Timbers Battlefield Preservation Commission.  He is a local chemist and a long time officer of the Executive Committee of the Toledo Local Section of the American Chemical Society.  He is employed as an R&D Director for a local chemical company.  Frank resides in Perrysburg with his wife and son.

The lecture will take place at the Monclova Community Center (Ottawa Room) located at  8115 Monclova Road –  just 3 miles West of St. Luke’s Hospital.  Admission and parking are FREE. An elevator is located at the west entrance to the building.  Hope to see you there! 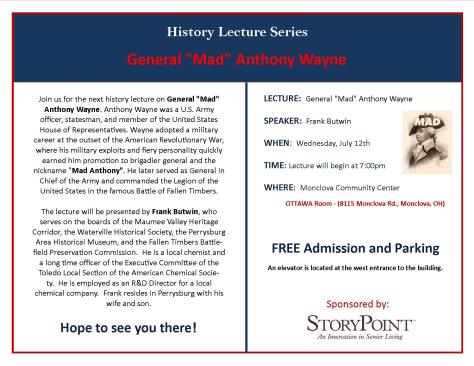 Get involved in YOUR Community Center and consider becoming a member! It includes lots of benefits: discounted tickets to MHF events, room rental discounts at the Center, and more!! (See our 2021 Membership form under our “Membership Tab”)

By supporting us financially you can help to provide fun activities for young and old alike in our community.

If you are interested in more ways you can help support the Monclova Community Center, please call the center at 419-861-1336 today!